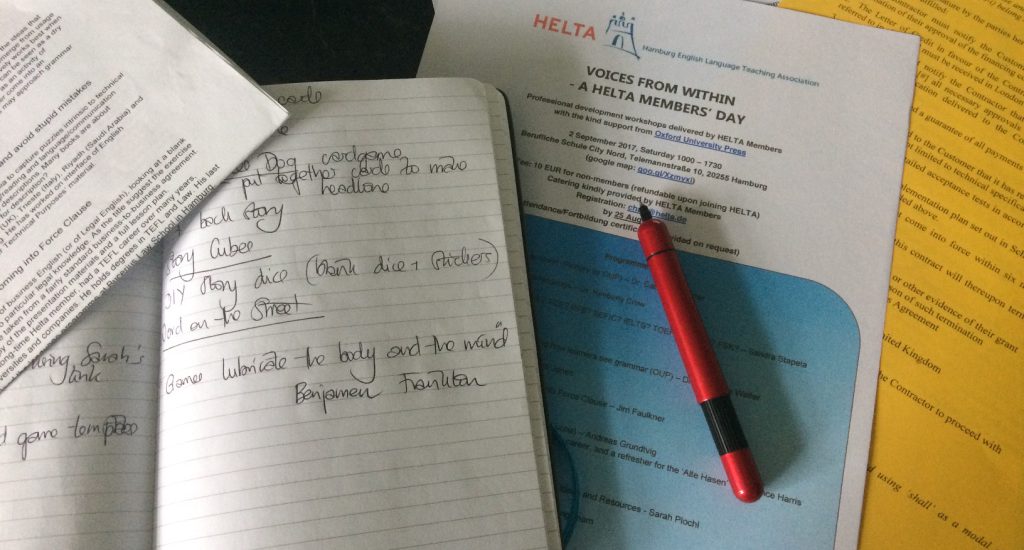 Yesterday, I travelled three hours  by train from Osnabrück to Hamburg to attend a one-day event organised by HELTA, an affiliate of IATEFL, the Hamburg English Language Teachers’ Association, at the Berufliche Schule City Nord, Telemannstrasse 10, Hamburg. The invitation read: “HELTA MEMBERS DAY – VOICES FROM WITHIN (with Catherine Walter). A day of professional development workshops delivered by HELTA Members with the kind support of Oxford University Press.” I found it well worth the long journey and an excellent example of what a small, locally based group of enthusiastic, interested practitioners can achieve. All that is needed is some local talent and a group of people who like their profession enough to, in this case, spend a Saturday enjoyably sharing with  and learning from like-minded people. About 35 people attended. There was no charge for members of HELTA and other German ELTAs i.e. subscribers to the online group Inter-Elta, and a self-prepared  buffet lunch and coffee and cake was provided at no charge  by the members. Non-members were charged the amazingly reasonable price of 10 Euro for the event, food included.

The workshops, presentations with a short time at the end for questions and discussions, varying from 15 minutes to one hour were as follows:

There follows just a few sentences about each presentation. They are not full summmaries, simply brief indications of what the talks were about.

Catherine made the point that  “Pronunciation” i.e. to many teachers “speaking”, involves listening, too. She explored aspects of pronunciation that are worth teaching for listening. She concentrated on segmentation, catenation and phoneme differentiation.

The character of the English language, Dr. Kimberly Crow

Dr. Crow maintained that beyond vocabulary and grammar a learner has to come to understand the socio-cultural aspects of a language. She suggested that different languages had different characters and read examples from her German book on the subject. Her presentation was followed by a lively discussion about differences in these respects between English and German. (No handout).

Sandra gave a detailed, helpful review of most of the bewilderingly large number of examinations in English available. The handouts for the presentation are available here: H4[2]H5[1]H6[1]H7[1]

Catherine stated that using language communicatively  works best when it is followed up by the explicit learning of grammar  rules. She highly recommended and provided examples of exercises in inductive procedures. [ For more details and an extensive bibliography, see hand-out in Appendix.] I cannot resist commenting that I do not agree with much of what was said and would argue that what was being recommended was studying the language and not practising it for communicative purposes. But I concede that my anarchist views on the role of “grammar” in the learning of a foreign or second language are hardly likely to be in harmony with those expressed in : “How English Works. A Grammar Practice Book”, Michael Swan and Catherine Walter. Oxford (1997). The handout for the presentation is available here: CWalter_Grammar_OUP-Hamburg-2017-08

Nick referred to and talked about some of the contents of an in-firm book on the writing of technical English that he was just completing. He focussed primarily on the writing of descriptions and instructions. (No handout).

Jim worked with a text based on a clause taken from a typical business-to-business agreement. The handouts for the presentation are available here: H18[1]H19[1]H20[1]

It was typical of Andreas that he chose a form of presentation which only took up 15 minutes. He brilliantly presented 20 slides (20 seconds each) in the allotted time on the history of the English language ending up with Denglish. The slides were visually fascinating. (No handout).

Some Considerations when beginning an EFL career, and a refresher for the “Alte Hasen” (Pecha Cucha) – Lawrence Harris.  Lawrence also did a Pecha Kucha containing some useful advice to new teachers (for example, dress smartly) and, refreshingly, advised new teachers who knew they were good not to hesitate in asking for an increase in salary. (No handout).

The language of Business – Helen Waldron. Helen’s presentation bore witness to the fact that she studied linguistics. Her presentation amounted to a fascinating stylistic analysis of how the language used over the years by various companies has changed and been influenced, for example, amongst others by the language of the military, sport, politics and engineering. (No handout).

Bring A game – Bring Your A Game,    Vincent Wongaiham. In the last presentation of the day, Vincent, in a brisk 15 minutes showed himself to be HELTA’s resident expert on a range of games that can be used in class. The handouts give full details, including prices and are available here: H21[1]H22[1]

Apart from cleaning up, the day ended with participants dividing into groups or four, plus one trio to answer three rounds of eight questions  – 24 questions in all. The quiz master was Jim Maloney. The winning team were each awarded a small bottle of something restorative.

From parting comments from the attendees as they left it seems there was general agreement that the day had been most worthwhile and everyone, along with a small collection of handouts, had something to take home, including , thanks to the correct answer to one of the quiz questions, the knowledge of the year when the ‘F’-word was first published.